Spaghetti All’Italiana is a classic spaghetti with tomato sauce from a vintage cookbook.  It comes to me by way Recipes from “Round the World”, published by the McNess company in the 1937.  This book includes recipes from over a dozen countries, from Argentina to Switzerland, along with a selection of American favorites.  Each recipe is presented in its ‘original’ language, side-by-side with an English translation.  But Spaghetti All’Italiana isn’t traditional Italian cuisine.  It may have its heart in Italy, but is certainly the product of an early twentieth century test kitchen.

Now normally I wouldn’t get excited by a spaghetti recipe.  I know that many families have a ‘secret’ sauce or mighty meatball recipe that makes spaghetti night an occasion.  For our family, spaghetti with red sauce is a quick and dirty weeknight meal.  The thing to make when you don’t have time for dinner.  Sometimes we’ll even use jarred sauce.  Everyone likes spaghetti just fine, but no one gets particularly excited for it.   I was hoping that Spaghetti All’Italiana would mix things up a little.

There are two clues that Spaghetti All’Italiana isn’t your nonna‘s spaghetti recipe:  flour, and Kitchen Bouquet.   I’m always skeptical when flour is used to thicken a tomato sauce.  There’s a reason that God invented tomato paste.  And Kitchen Bouquet isn’t traditional anything.  For the uninitiated, Kitchen Bouquet is a browning agent used to add color to gravies and roasted meats.  On its own it doesn’t taste like much, maybe like a concentrated, unsalted beef broth.  It’s been around for well over a century and was a staple in my grandmother’s kitchen.  I always keep a bottle on hand for beef gravy, but found it an unusual addition to spaghetti sauce.  It may be a nod to the Italian-American tradition of spiking tomato sauce with beef broth. 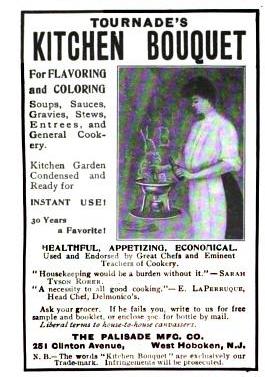 Traditional or not, Spaghetti All’Italiana was a welcome departure from our usual spaghetti ritual.  It’s not much more difficult than using a jarred sauce and comes together in a half hour or so.  Perfect for a weeknight meal.  Preparation is straightforward.  Prepare spaghetti per package directions.  While the water is boiling, fry up some mushrooms and a little bit of onion.  Stir in a little bit of flour to form a roux, then mix in the Kitchen Bouquet and canned tomatoes and simmer.  Stir in the spaghetti when it’s done cooking and smother in Parmesan.

I’ve made a couple of adjustments in my adaptation, mostly to incorporate fresh ingredients.  The original recipe calls for “onion juice” which, along with garlic juice, was once a supermarket staple.   It was sold in small bottles like one might find for lemon juice or vanilla extract, but it’s nearly impossible to find in modern supermarkets.  I’ve substituted a little bit of fresh, finely minced onion in its place.   I’ve also replaced the canned mushrooms with fresh.  This adds a little bit more cook time to sweat the liquid, but retains a lot of the savory goodness that canned mushrooms lack.  Neither dramatically changes the spirit of the recipe.

Spaghetti All’Italiana was a minor success with the family.  I served it with a good quality Italian sausage and tossed Caesar salad.  The kids added more cheese but I thought it was fine as is.  I still have mixed feelings about the flour.  It helps the sauce stick to the pasta, but also gives it a pasty quality that I associate with canned pasta.  As comfort food this works fine, but you’re not going to impress your neighbors.  Enjoy!

This site uses Akismet to reduce spam. Learn how your comment data is processed.